Commander Duncan is a 45 year law enforcement professional. He served honorably in the United States Air Force Security Forces before he worked his way through the ranks with the Broadmoor Police from Reserve Officer to Commander. While still with Broadmoor, he also was the Chief of Police with the City of Ione and the Gonzales Police Departments.

Commander Duncan has been assigned to every operational and administrative position that an agency can have. Over his career, he has trained and mentored hundreds of current and former law enforcement officers. He is now the Broadmoor Police Department’s Commander / Assistant Chief of Police and Risk Management Officer and holds a California POST Executive certificate. 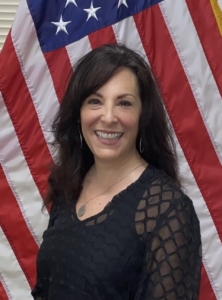 Lisa Hernandez started at the Broadmoor Police Department in early 2018. After graduating from Cal State Hayward with a BA in Psychology, she went to work at SFO as A Customer Service Supervisor for Southwest Airlines. After a decade with the SWA she worked as a teacher to young children at a Preschool. She always had an interest in the law enforcement field and was happy to start at Broadmoor as an Office/Records Clerk. Now as the Administrative Assistant/Records Clerk her knowledge and understanding of law enforcement and the judicial system continues to expand.